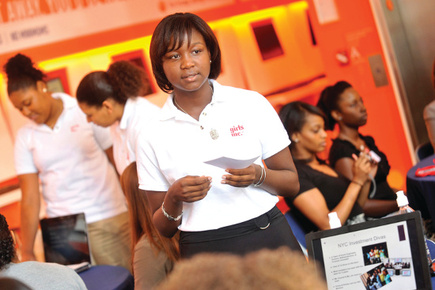 In 2006, a report by the Girls’ Coalition of Greater Boston criticized afterschool programs for overlooking the needs of girls. The report said the needs of boys were assumed to be the norm and, in some cases, gender stereotypes were reinforced. It sought to prod changes within programs, and it pointed out funding disparities.

This was not the first assertion that girls were being shortchanged. Studies have pointed out a lack of science and technology education for girls and drops in girls’ confidence in the classroom. More recently, a crisis among boys has been asserted, identifying alarming graduation rates among boys, especially boys of color.

Gender-specific programs are positioned to address these issues, say the leaders of groups such as Girls Inc., which operates a network of locally managed girls’ nonprofit organizations throughout the U.S. and Canada.

“We believe there are big differences in terms of the issues girls face [in comparison with boys,” said Judy Vredenburgh, CEO of Girls Inc., which serves 136,000 girls ages 6 through 18, using research-based curricula and trained, professional mentors.

Members of Boys to Men gather for a group photo. Photo courtesy of Boys to Men
Similarly, Craig McClain, co-founder of the mentoring network Boys to Men, said his organization addresses a need specific to boys. The group works to “create a community of boys who talk about emotions — about what’s really going on in our lives,” he said. Based in San Diego, the organization provides group mentoring for boys ages 12 through 17 in community settings and schools. More than 6,300 boys and men have participated since 1996.

Gender-specific programs have a long history in the U.S. Some of the earliest came out of the industrial revolution. Girls Inc., for example, began in 1864 in response to the needs of young women who flooded into the textile mills of New England. Poorly paid and with little opportunity for recreation, the young women benefitted from a place to gather and discuss common concerns. The Young Women Christian Association (YWCA), founded in 1858, and the Young Men’s Christian Association (YMCA), founded in 1844, formed in response to the bleak conditions faced by young factory workers in London.

In the early 1900s, single-gender scouting organizations began in England and quickly were adopted in the United States. The Boy Scouts of America was modeled on the British movement started by Robert Baden-Powell, which emphasized outdoor skills and the development of character. Juliette Gordon Low began Girls Scouts of the USA in 1912 to get girls out of isolated home environments and into active outdoor pursuits and community service.

Today’s gender-specific programs are based on more recent ideas about the needs of boys and girls. The men’s movement that underlies Boys to Men was sparked by poet Robert Bly in the 1970s, with his book “Iron John,” which sought to redefine masculinity. It came in the wake of the feminist movement’s redefinition of women’s roles.

Girls Inc., which in the 1950s focused on preparing young women to be wives and mothers, was influenced by feminism in the 1970s and shifted its focus to empowering girls.

In 2009, a Boston organization, Build the Out-of-School Time Network (BOSTnet), took a look at the shifting debate around gender-specific programs and noted the new interest in single-sex education as well as the charge of a “boy crisis” from the National Association for Single Sex Public Education, which has used the decreasing graduation rates of Hispanic and African-American males to argue for all-boys schools, based on research into biological differences. That research has been challenged by the American Civil Liberties Union and the National Organization for Women – even as all-girls’ schools organize to meet the different learning styles of girls.

Criticism has also been leveled at programs within the juvenile justice system. Two scholarly articles presented at a UCLA Law Review’s 2012 symposium said that a blindly followed gender-neutral approach ended up failing young women in the system. Set up with boys in mind, the system failed to take into account girls’ gender-specific experiences. For example, when girls run away, it is sometimes an effort to escape pimps or other exploiters, but it is viewed simply as an offense.

Research on intervention programs for youth generally lacks a gender analysis, according to the U.S. Office of Juvenile Justice and Delinquency Prevention Girls Study Group. Evidenced-based programs often do not include a large-enough sample of girls to make conclusions about how the program is serving them, BOSTnet’s 2008 report asserted. By extension, assessment tools may not be gathering data on how well some programs are serving boys specifically.

Georgia Hall, a senior researcher with the National Institute on Out-of-School Time, sees a place for single-gender in out-of-school programs. Youth benefit from emotionally safe spaces, she says. However, programs should be set up so that no group is isolated. If girls have a group, then boys should also have a group.

It’s the role of the facilitator to make sure the environment is empowering and not slighting to any one group, Hall said, and it’s important to give youth a chance to determine what they would like to explore in a common-interest group.

Vredenburgh of Girls Inc. also pointed out the value of protected space. For example, at age 17, 78 percent of girls are unhappy with their bodies, she said. “We work to counter thinking that girls are supposed to look a certain way and be a certain way,” she said. The goal is for girls to value their whole self. Trained mentors lead the programs, which include content about healthy living, education and independence. When girls turn their bad feelings against themselves, the problems of cutting, eating disorders and other mental health challenges sometimes result, Vredenburgh explained.

Protected space is also important for boys, McClain said. It allows them to talk about their feelings in a way that boys might actually engage. Boys to Men seeks to give them the emotional skills to deal with what McClain describes as the crisis of adolescence.

It’s all too easy for a boy without male role models to get the message from movies and TV that a “real man” is an emotionally closed figure — something like Hulk Hogan, said McClain.

McClain said that through the example of the mentors, who discuss their own lives and engage the boys in discussion, “the boys see what real manhood is, not the macho façade.”