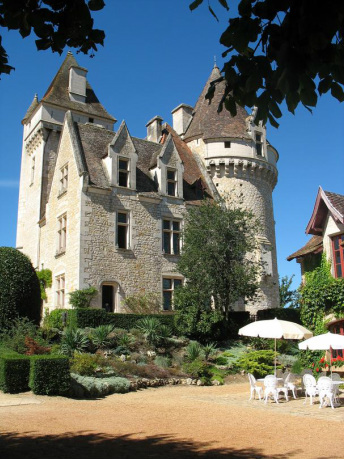 Josephine Baker called it her “Sleeping Beauty Castle.” The American singer and dancer, star of the Folies-Bergere in Paris, discovered the chateau on a vacation in southwest France.

Today, it houses a museum that details Baker’s extraordinary life. Vacationers in the Aquitaine area of France might want to make it a stop. It is open April 1 through Nov. 5.

Visitors see the dining room where Baker entertained French luminaries, the white-tiled kitchen where she fed her 12 adopted children and the grand salon where her theater costumes are displayed. Another room is devoted to her political life, displaying the medals she earned in the French Resistance. And everywhere are posters, playbills, photos and drawings of Baker by well-known artists.

I drove to Les Milandes from Bordeaux, leaving the expressway at Perigeuex to turn south. Eventually, the roads became tiny and winding, with hunks of cliffs jutting up and French drivers speeding around curves with abandon.

The beautiful Dordogne River runs through this area of Aquitaine. In towns along the river, swans swim under arched stone bridges, and other birds and wildlife are abundant.. The region is full of medieval towns with Romanesque churches, the “bastide” town build in the 13th and 14th centuries as fortresses.

The chateau was built in 1489 by Francios de Caumont. Just inside the chateau entrance is a room with a huge fireplace carved with the Caumont family’s coat of arms. Here, peasants came to pay their taxes each year, 10 percent of their harvest.  Click here for  more history.


A curving staircase descends from right to left so that defenders coming downstairs could wield a sword in their left hand and steady themselves with the right.

As visitors enter each room of Les Milandes, an audio recording plays, describing what is seen and detailing snippets of Baker’s life. Visitors hear Baker singing and get a taste of the sultry and sweet that defined her music.

Along the staircase, a series of drawings show Baker in motion, jaunty and rakish, sensual and playful. In photos, she crosses her eyes and makes droll faces. The self-parody of vaudeville contrasts with the self-awareness in her expressive eyes.

Baker was born in St. Louis, Mo., in 1906, the daughter of a laundress. As a black child in an impoverished family, she searched for food behind the city market and scoured the ground for coal around Union Station. She never forgot the race riots of 1917.

But Baker had a talent for singing and dancing. In an era of vaudeville and jazz, she began performing with a minstrel band when she was barely more than a child. She became a chorus girl with a road company. Reaching New York, she caught the eye of a Paris talent scout searching for black performers, and at age 19, she went to Paris to dance in the jazz show La Revue Negre.

She became a dance hall sensation, performing semi-nude at the Folies-Bergeres in a G-string decorated with bananas.

But Baker wanted to make more of herself. She took lessons in French, singing, dancing and drama, eventually becoming a singer and actress. She found an acceptance in France that would have been impossible in the United States, when racial segregation was enforced.

Baker first saw Les Milandes, which is located deep in the countryside, in 1937 when she was a wealthy woman.

Soon after arriving, she had a bathroom designed in the style of her favorite perfume bottle, “Arpege.” Its sleek black, gold and green colors dominate the room. The walls are black and gold mosaic, interspersed with glass tile. A sink and toilet are green porcelain, and the ceiling is covered in gold leaf.

In the 1950s, she was dressed by the fashion designer Christian Dior, and her favorite perfumes were “Miss Dior” and “Diorama.” Visitors can see the pink Portuguese marble bathroom that mimics these bottles.

In the grand salon, its walls covered in red velvet, are 16 costumes, as well as the  extravagant feather headdresses Baker wore onstage early in her career and a black outfit she wore at a Carnegie Hall performance in 1973.

Also displayed are a collection of nude photos that were not public in her lifetime. Her famous banana belt is in a glass case in the library.

Baker combined a flamboyance and theatricality with courage and deep convictions.

She was outraged by segregation, insisting on non-discrimination clauses in her American contracts. She wrote several books, including one on racism and injustice, titled “My Blood in Your Veins.”

At the outset of WWII, after the German invasion of France, Baker was approached by a division of the French Resistance, asking if she would help their clandestine efforts to fight the invaders.

“France made me,” Baker said. “I am ready to offer my own life. I am entirely at your service.” She carried coded messaged in her musical scores and she helped refugees escape the country.

For her efforts, she later received the “Croix de Lorraine” and “Legion d’Honneur” medals displayed at the chateau. Photos show her at a 1957 anti-racist conference held at Les Milandes and at the 1963 March on Washington, where she associated with Martin Luther King as well as Bob Dylan.

After WWII, Baker was caught up in a new dream.  She would create a “Rainbow Tribe,” a bevy of children of different nationalities and religions who would live together in peace. She eventually adopted 10 boys and 2 girls.

One children’s room has been restored at Les Milandes, used by her first child Akio, originally from Korea, who is now a banker in Paris.

She also adopted Janot (Japanese), now a gardener in Monaco; Jari (Finnish), a restaurateur in New York; Luis (Colombian), a businessman in Monaco; Marianne (north African), a medical secretary in Paris; Brahim (north African), author of a book about Baker; Moise (French and Jewish), who died in 1997; Jean-Claude (French), a writer in Paris; Noel (French), a Paris restaurateur; Koffi (Ivory Coast), a restaurateur in Buenos Aires; Mara (Venezuelan), employed by the French government in St. Etienne; and Stellina (Moroccan), who teaches French in Italy.

The chateau includes a gift shop that sells books about Baker’s life and a restaurant with outdoor seating giving visitors a view across the gravel courtyard toward the boxwood-bordered gardens.

Near the gardens, an hour-long, not-to-be-missed falconry exhibit takes place each day. Falconer Steeve (cq) Paille demonstrates this medieval sport. He shows off his birds and describes their action (in French only). He sends them flying from a perch on his gloved wrist and tosses them raw meat as a reward.

Near the falconry area, visitors can look across a parapet guarded by gargoyles. Beyond it, the ground drops away and a wide sweep of countryside is spread out below.

Trouble at the chateau

By 1951, Baker’s husband, bandleader Jo Bouillon, had become disenchanted with numerous adoptions and disregard for expenses. He eventually left and Baker’s finances worsened. She returned to the stage at age 52 to earn money.

In 1964, an auction of the chateau was narrowly averted, and Baker refused a purchase offer from the owner of Club Med. Four years later, however, the chateau was sold at auction for a fraction of its value. Baker was devastated.

In 1975 she was invited to perform at the Bobino Theater in Paris to celebrate  50 years in show business. The performance was a hit.

She died suddenly that year, after having made a successful stage comeback at age 69.

The chateau then passed through several owners. In 2001 Angelique de Labarre bought it and continued a former owner’s effort to make it a museum.  LaBarre has also written a book entitled “Le Chateau des Milandes.”

As a museum, the chateau relies a great deal on memorabilia. But its simplicity works in its favor. It conveys the sense that this was a home, a lived-in “castle” filled with Baker’s character.

The 500-year-old stones are a reminder that Baker lived in a particular historical period with its own challenges and injustices. Her spirit lives on there, with its own brilliance and poignance.

Getting there:
Chateau des Milandes is near the small town of Castelnaud-la-Chapelle. There is no public transportation directly to the chateau. A car and a good map are the best bet.
The nearest towns served by rail line are St. Cyprien and  Sarlat on the Bordeaux-Sarlat railway, which runs between these cities five to six times a day.