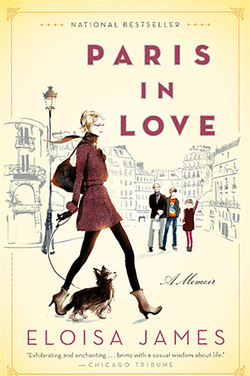 Eloisa James, the author of 21 romance novels, spent a year in Paris with her husband and children. She planned to write four books during that period, but found herself spending an inordinate amount of time crafting posts and tweets about her experience.

Now, she’s strung her entries together and fleshed them out in a memoir, “Paris in Love,” a chronicle of that year. Surprisingly, it reads like a story.

“Quelle horreur! The guardienne came to clean and noticed that our glassware was smeared … The box of dishwashing powder that’s we’d been using? Salt.” It seems that the French label on the box had confused the family.

“Our Paris apartment is elegant in the way of a Chanel coat found in an attic trunk: worn around the seams but beautifully designed...”

James' observations cover such subjects as the Leonardo da Vinci School, where her teenage son and 10-year-old daughter struggle and pout, the saga of the homeless man who lives near their subway entrance with his dog, and the way the sky and the buidings melt together in evening light.  She window shops wistfully, immerses herself in cooking ducks and sausages, explores various corners of the city, and critiques a myriad of restaurants.

Eloisa James happens to be the pen name of Mary Bly, a Renaissance scholar and Fordham University professor. In 2005, she came out as a romance writer to a roomful of her colleagues, then wrote an op-ed piece in the New York Times defending herself. She’s also the daughter of the renowned poet Robert Bly and the short-story writer and teacher Carol Bly. Her mother didn't care for her romance novels. "In five years, you're going to write a real book," she told her daughter.

James, however, has beaten a path across the worlds of literary study and racy romance. With "Paris in Love" she takes on a different genre and, perhaps for the first time, her writing brings together her two personas. In the memoir, vignette after vignette presents characters and scenes in the tone of someone observing a slightly absurd world, where the daily and the exotic bump up against each other. It's a world in which things don't fit together neatly -- to our chagrin but also to our pleasure.

There's always the arrival of the unexpected.  Her mother-in-law's obese chihuahua gets stuck between the wall and the sofa. The Thai restaurant on the corner explodes. Her son Luca gets a good grade on a math exam. Her daughter bursts in with a new drama:  “Anna flung the door of the apartment open after school: ‘Mom! I was attacked today.’ ‘What happened,’ I asked. ‘A girl named Domatilla slapped me.,’ Anna said, eyes open very wide. ‘She said I was screaming in her ear.’"

One unexpected thing occurred in 2007. James' mother died of ovarian cancer, and two weeks later, James was diagnosed with breast cancer. She was successfully treated, but didn't feel the expected epiphany or heightened urge to live in the present.

"Rather than living my life in the moment, I wanted to live someone else's life -- specifically that of a person who lived in Paris," she said.

During her year there, she reveled in the city: "I walked through the twilight to Galeries Lafayette, surely one of the most glamorous department stores in the world... Instead of a counter, the skin-care company La Mer has a nine-foot-long sinuous aquarium..."

For all her Parisian sensibility, her Fordham position, her Italian husband -- (excellent accouterments for a romantic heroine) James has deep roots in the Midwest.

She grew up in a small town in Minnesota. Her poet father made very little money. Her once-affluent mother pulled down curtains to make school dresses for her daughters. James remembers Simplicity patterns lying around the house, an awkward high school prom where dancers circled the gym to "Stairway to Heaven," and a general sense of not fitting in.

As an adult -- and a scholar and novelist -- she's pursued her fancy in a very original way. Things fit together, her book seems to say -- bawdy romance, scholarship, the beauty of Paris, and even a memoir initially composed on Facebook.

Mary Bly / Eloisa James teaches Shakespeare at Fordham and has a scholarly work exploring the nature of punning in 16th century plays.  Twelve of her romance novels have been New York Times bestsellers.